Artists who are members of the El Paso Transparent Watercolor Association have been working on BIRDS this spring and summer. We discussed differences in bird and human skeletal construction, studying bird behavior, flight and song. We shared birdwatching experiences, practiced painting techniques and drawing skills.

Following are some of the great "bird" paintings they've done and want to share with you! If you enjoy our little virtual show, share this blog page with your friends. Just copy the url, above, and paste it into your own email inviting friends.

Posted by Laurel Weathersbee at 9:52 AM No comments:

Chickens to the Max!

Chickens bring up a real mixture of emotions for me - I grew up with farming people. Farmers all had chickens. As a small child, I found chickens VERY SCARY. If you've ever been chased by a rooster, you know what I mean, and then there are other scary things in the chicken yard - like reaching into a dark area to find eggs (and finding a bull snake instead), having to rake and sweep in a chicken coop (ick) or stepping into a big wad of chicken-leavins...No, I didn't like chickens then and I don't think I like them now. BUT, that being said, they were an integral part of my early life -- from the early morning crowing to the day long clucking to fried chicken on the dinner plate to the feather pillow under my head at night.


Max himself is beautiful and inspiring -- look at those feathers! Fortunately, he stood still enough for this portrait!


Of course, a Maximilian around here reminds us of Ferdinand Maximilian Joseph, appointed by Napoleon, who wanted favors! That Maximilian reigned as emperor of Mexico from 1864-1867. This guy looks pretty regal, don't you think? I still don't like that look in his eye! I used a tiny sharp knife to scratch feathers in the dark areas.

Posted by Laurel Weathersbee at 8:47 AM No comments:

Laughing Buddha #2 was not as good a painting as the trial run, so I decided to put the two together, via weaving:


Not sure I saved it, but it was an interesting exercise. Weaving together "failed" paintings has sometimes produced a sparkling surprise. Other times, it just doesn't work. Not always clear why... Here are some thumbnails of other weavings I've done through the years. Some of them have appeared in this blog.

Posted by Laurel Weathersbee at 9:55 AM No comments:

I couldn't tell you today whether the Mah Jongg hand "Double Happiness" inspired this composition, or did I just chuckle in recognition when I read the name of the hand...At any rate, assembling a few of my favorite things -- a garden-sized laughing Buddha, a pot of white coral bells and a glass bluebird of happiness -- was double happiness.

This morning I  started swiping paint on the trial watercolor sketch, and it's not too bad...I think I'll transfer the drawing again to good watercolor paper and make another run at it. And, rather than pick apart the composition flaws here, I think I'll just enjoy the inspiration.

Could there be anything more inspirational than flowers? Not for me. And the most "golden" of all might be yellow roses, my fave. Right after we moved into town, September of 2014, my friend Nancy and her husband Fred came for a visit. Nancy brought me a "yard warming" gift, a yellow rose bush!

That rose bush grew and prospered (unlike the dozens of others I have unintentionally killed over the years). Today, it is covered with blooms: 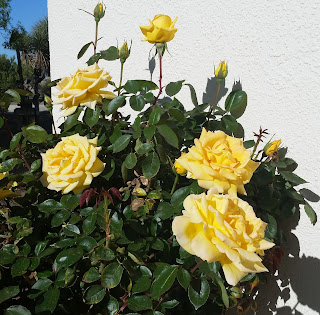 A couple of years ago I attempted a painting of my yellow roses, cut, in a pitcher given to me by another friend, Gail.  Here it is: 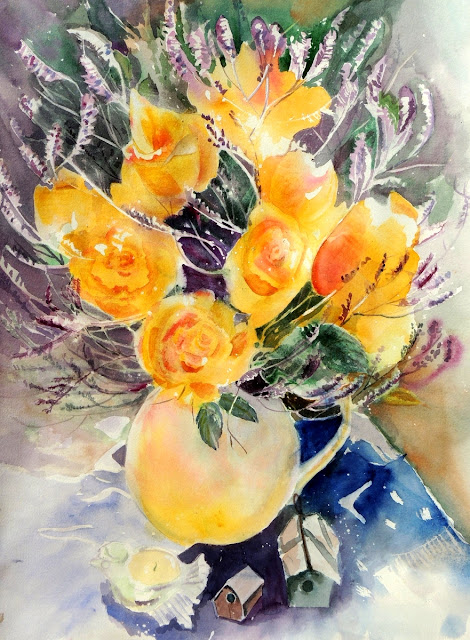 Not my best work, probably, but wow did I enjoy painting those roses! I used a lot of nickel azo yellow, quin coral and too much indanthrone blue. Maybe it's time to try that again...


Posted by Laurel Weathersbee at 9:02 AM No comments:

Surprise! Birds....again! I am endlessly inspired by these creatures. Their plumage -- bright or subdued, their songs -- musical or raspy, everything about birds is so intriguing.


Several years ago, my husband and I took a "Ghost Town Tour," visiting a number of ghost towns throughout New Mexico. One was Mogollon, in the far western part of the state, a forested and unspoiled area. While walking through a wooded area, I noticed a flash of red.  Had to get out my bird book to identify the little guy: a Painted Redstart. Wow! what a brilliant red!

I decided to place the birdies on top of a blues-greens quilt background, simulating light-through-the-trees and leaf movement.  Gorgeous little guys - I hope I get to see them again.

Recently, a dear friend gave me a stack of unfinished watercolor paintings that she had intended to discard. I told her, "Don't forget your friend, the collage artist!" I think she thought I was crazy -- as usual.

I've had fun picking through the stack, looking at colors and textures. Next month I'm going to do a two-hour torn paper collage class for a local arts organization. The subject is birds -- surprise!! So using that as a starting place, I have been enjoying creating a group of collages with the discarded, unfinished paintings. Enjoy!

Thanks, Theresa, for passing the Versatile Blogger Award and the Liebster Award to Teacup Inspiration!